Mike, who served in the Royal Lancers regiment for 15 years before joining Jaguar Land Rover, took on the challenge after discovering so many ex-services’ charities were struggling for funds because of the coronavirus pandemic.

His challenge began on 1 November 2020 and ends on 11 November 2020 – Armistice Day. Over the 11 days he will be joined by colleagues from Jaguar Land Rover in Halewood, who will cycle, run or walk distances in multiples of 11. But only Mike will wear the 11kg weighted vest – the equivalent of a combat armour suit.

Mike is fundraising for Mission Motorsport, which helps the recovery and rehabilitation of veterans like him by providing opportunities through motorsport and the automotive industry. The Royal British Legion will also benefit.

Mike joined Jaguar Land Rover eight years ago when he was discharged from the services. Mission Motorsport supported his transition into civilian life and introduced him to a career in engineering through the Jaguar Land Rover supported employment scheme.

Many of these charities rely almost entirely on public interaction at events, which have all been cancelled due to the pandemic.

I experienced first-hand just how important these services are when I was injured with the army and medically discharged – they were a lifeline to me.

Mission Motorsport was an anchor during my transition back into civilian life and allowed me to get a job with a leading British automotive manufacturer which ultimately helped me become the man I am today.

These charities offer veterans the chance of a positive and bright future, which is why I still volunteer as much as I can to help others going through what I did. 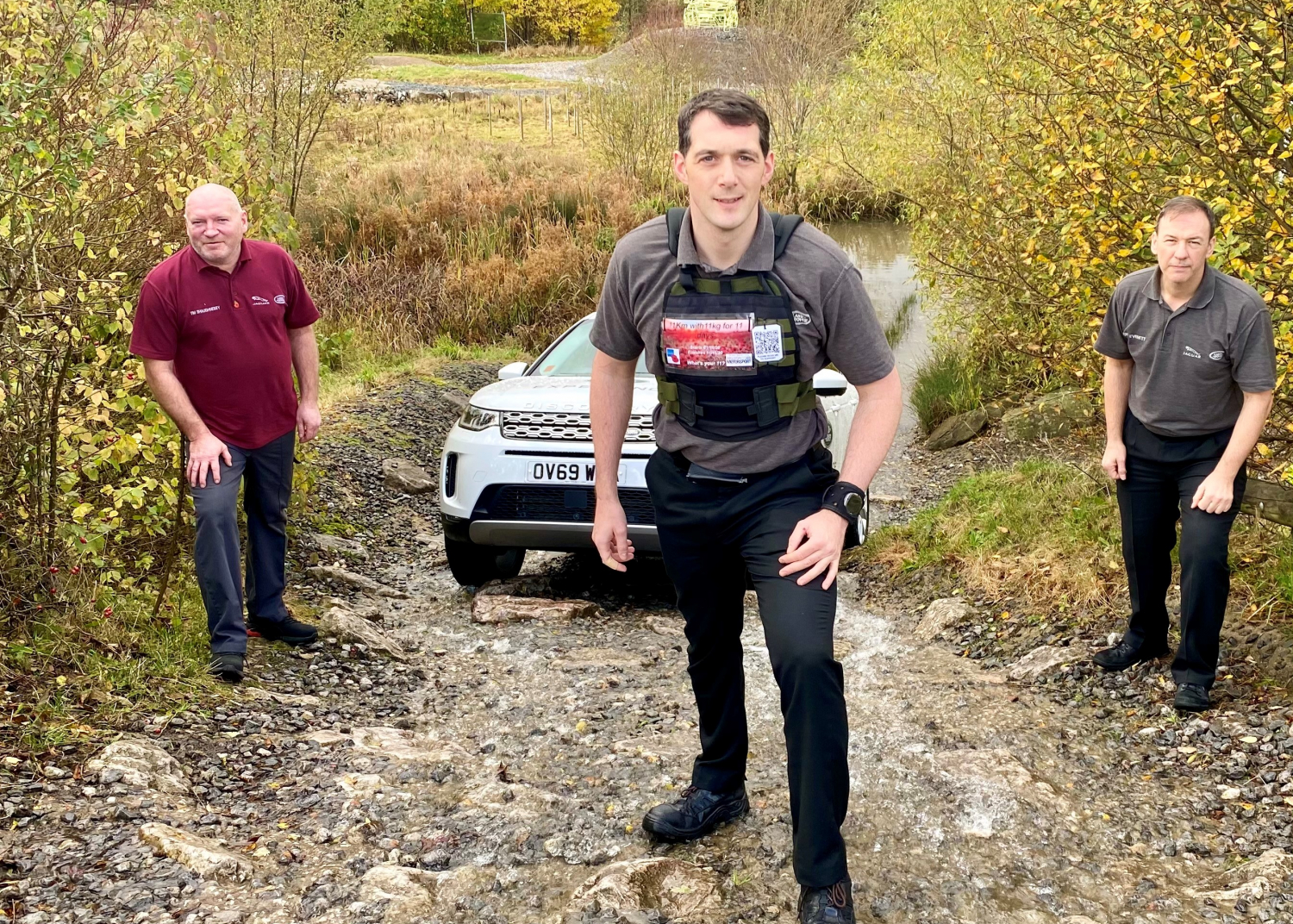 There is a very special community spirit at Halewood. I’ve never seen anything quite like it during my career in the automotive industry.

I’m incredibly proud of Mike and the team for what they are trying to achieve with their challenge, and of all our employees who have gone that extra mile to help support charities and organisations in our community who are struggling in these unprecedented times.

As Mike was at work during most of the challenge, he wore the 11kg weighted vest during his shifts to walk the bulk of his 11km daily target.

He displayed a large QR code on his work shirt so colleagues could scan it from a safe two metre-distance and go to his Just Giving page.

Jaguar Land Rover is the UK’s largest automotive manufacturer, built around two iconic British car brands. Land Rover is the world’s leading manufacturer of premium all-wheel-drive vehicles. Jaguar is one of the world’s premier luxury marques, as well as being the first ever brand to offer a premium all-electric performance SUV, the Jaguar I-PACE.

At Jaguar Land Rover we are driven by a desire to deliver class-leading vehicles, providing experiences people love, for life. Our products are in demand around the globe and in 2019 we sold 557,706 vehicles in 127 countries.

At heart we are a British company, with two major design and engineering sites, three vehicle manufacturing facilities, an Engine Manufacturing Centre and soon to be opened Battery Assembly Centre. We also have vehicle plants in China, Brazil, India, Austria and Slovakia. Three of our seven technology hubs are in the UK – Manchester, Warwick (NAIC) and London – with additional sites in Shannon, Ireland, Portland, USA, Budapest, Hungary and Changshu, China.

We have a growing portfolio of electrified products across our model range, embracing fully electric, plug-in hybrid and mild-hybrid vehicles, as well as continuing to offer the latest diesel and petrol engines, giving our customers even more choice.

We are confident that our comprehensive strategy, exciting pipeline of market-leading vehicles and innovative approach to technology and mobility will see us continue to progress towards Destination Zero, our mission to shape future mobility with zero emissions, zero accidents and zero congestion.

The Royal British Legion is the nation's biggest Armed Forces charity providing care and support to all members of the British Armed Forces past and present and their families. The Legion champions Remembrance and safeguards the Military Covenant between the nation and its Armed Forces. It is well known for the annual Poppy Appeal, and its emblem the red poppy. www.britishlegion.org.uk

A Service Charity and a member of the Confederation of Service Charities, Mission Motorsport has an award-winning collaborative model of working with government and the other service charities. It is funded by Help For Heroes and The Royal British Legion as well as by industry partners and independent fundraising.

As part of the MoD's Career Transition Partnership, the charity helps those leaving the military to find employment in the automotive industry. A City and Guilds training provider, Mission Motorsport's Training Wing delivers Level 3 Diploma courses and full apprenticeships enabling service leavers to bridge the gap between military service and second careers as civilians, beyond injury.

In its seven years of operations, Mission Motorsport has delivered more than 5,000 training days of sport for 1,500 wounded, injured or sick beneficiaries, leading to over 400 placements and over 150 jobs. The Charity’s veteran employment programs have paved the way for over 1,700 veterans into employment in the Automotive Industry.