Jaguar Land Rover and Gorillaz are working together to recruit the next generation of world-class electronics and software engineering talent with a code-breaking challenge found in the virtual band’s app.

Jaguar Land Rover and Gorillaz are working together to recruit the next generation of world-class electronics and software engineering talent with a code-breaking challenge found in the virtual band’s app.

The best performers will be fast-tracked through the recruitment process, helping to meet Jaguar Land Rover’s ambition to employ thousands of bright new talents over the next year. It’s a major change in the way the business looks for candidates, aiming to tackle the engineering skills gap and inspire and attract a diverse range of talent and new thinking.

Can you crack the code? Put your skills to the test!! Hey, maybe you might land yourself the most BADASS job you can imagine. Dare to win! 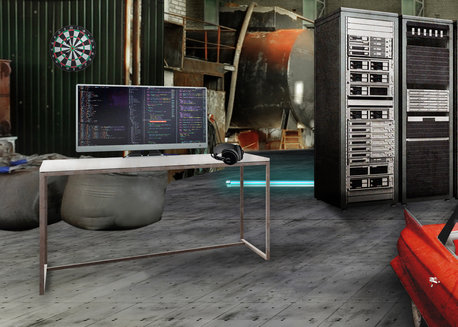 The Gorillaz App today launches a new Jaguar Land Rover recruitment area in the form of a 360-environment situated in the garage of the band’s home which also features all the iconic vehicles from Gorillaz past. Here, applicants can explore and take a two-part challenge. The first part, designed to educate users about the benefits of electric vehicles, involves assembling the Jaguar I-PACE Concept, Jaguar's first all-electric five-seater sports car. Users can learn about the vehicle’s performance, battery technology, space, charging and range.

The second and more demanding part of the game, developed to engage and recruit budding electronic wizards and coders, will focus on cracking code in Alternate Reality Game format (ARG). The challenge takes them on a series of code breaking puzzles,that will test their curiosity, persistence, lateral thinking and problem solving skills - all real world attributes of a new generation of software and engineering talent.

As the automotive industry transforms over the next decade, fuelled by software innovation, we have to attract the best talent and that requires a radical rethink of how we recruit. Here we’ve found an engaging way to recruit a diverse talent pool in software systems, cyber systems, app development and graphics performance. It will be the first of its kind.

This exciting collaboration between Gorillaz and Jaguar Land Rover adds an Alternative Reality Game layer to what is already a cutting edge mixed reality mobile experience combining AR, VR and 360.

The Jaguar I-TYPE, Panasonic Jaguar Racing's all-electric Formula E racecar, appears in the garage. Users can click on a poster of Noodle with the I-TYPE and ‘FanBoost’ which enables them to vote for the @JaguarRacing team drivers to gain a power boost during their next race or to follow @JaguarRacing twitter channels.

The project follows on from Jaguar Land Rover’s STEM initiative with Gorillaz in 2016, where  founder member and female guitarist, Noodle, became Jaguar’s Formula E Racing Ambassador. As the UK’s leading investor in research and development and a leading global automotive manufacturer, Jaguar Land Rover is putting Noodle at the forefront of its campaign to  address the skills gap that manufacturing worldwide is facing.

The company has used its debut season in Formula E to promote Jaguar Land Rover’s thought-leadership position as a business that is shaping the future to solve the technology innovation and skills gap challenges.

Traditional application methods remain open and CVs will be accepted, but Jaguar Land Rover invites potential applicants to download the app and break the codes and solve the problems to fast-track their way into employment.

Gorillaz is singer 2D, bassist Murdoc Niccals, guitarist Noodle and drummer Russel Hobbs. Created by Damon Albarn and Jamie Hewlett, their acclaimed eponymous debut album was released in 2001. The BRIT and Grammy Award-winning band’s subsequent albums are Demon Days (2005), Plastic Beach (2010) and The Fall (2011). A truly global phenomenon, Gorillaz have topped charts around the world and toured the globe from San Diego to Syria, picking up hundreds of millions of streams and record sales along the way. Gorillaz have achieved success in entirely ground-breaking ways, winning numerous awards including the coveted Jim Henson Creativity Honor and are recognised by The Guinness Book of World Records as the planet’s Most Successful Virtual Act. New album Humanz was released to widespread critical acclaim last month, reaching #1 and #2 in the U.S. and U.K. album charts respectively, and topping the iTunes chart in 60 plus countries around the world.

About the Gorillaz App

A mixed reality app launched in April, the Gorillaz App invites the viewer in to the weird and wonderful universe of The World’s Most Successful Virtual Band, for the very first time. Pushing the boundaries of technology, the app allows fans to immerse themselves in the world of Gorillaz and join Murdoc, 2D, Russel and Noodle at home in the Gorillaz House. Developed by Gorillaz and B-Reel with support from Deutsche Telekom, the fully immersive mixed-reality app is a unique blend of real world, AR, VR and 360 environments, using the technology in a narrative context for the very first time.

To celebrate the release of the new album Humanz, fans were invited - via the app - to the Humanz House Party, an exclusive worldwide listening event which will allowed fans to hear the new album as part of the largest ever geo specific listening experience, bringing people together across 500 locations, from Tokyo to Santiago.